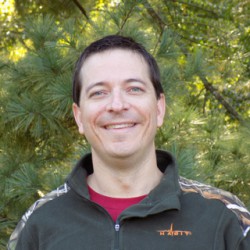 RED RISING by Pierce Brown was like THE HUNGER GAMES meets GATTACA.

In a dystopian future, humans have colonized other planets in our solar system and also developed a class society. The Reds are some of the lowliest of these, comprising the laborers who toil beneath Mars's surface so that the planet might one day be habitable for humanity. It's a hard life, evidenced by the fact that sixteen-year-old Darrow has one of the most dangerous jobs (working a drill) and is already married. When the ruling class of Golds executes his wife, Darrow joins a resistance movement whose goal is to disrupt the class system and expose the Golds' most dangerous secret: that Mars is already habitable, and has been for some time.

The dark and dystopian beginning to this was reminiscent of THE HUNGER GAMES and DIVERGENT, but once I got to Darrow's training montage I was hooked for the whole ride. He infiltrates the prestigious training school for Golds, in which the god-like teenagers are tested under the guise of a massive war game. Darrow intends to win it, and secure a prestigious place in Gold society. He makes both friends and enemies, ultimately learning that the veneer of Gold society conceals many more secrets than the truth about Mars.

This was a good book with a great ending, and I'm looking forward to the sequel. 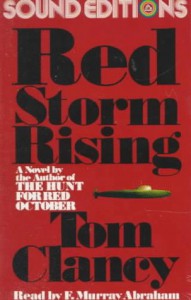 This was my first introduction to Tom Clancy, and remains my favorite book. The opening chapter is Clancy at his best: terrorists attack and destroy an oil refinery in the Soviet Union. This forces the Soviets to essentially launch an offensive against the rest of the world to secure their energy future.

The weapons systems, military strategy, and various points of view on both sides of the conflict kept me riveted the whole way through this massive volume. If you liked The Hunt for Red October, this one's just as good.

An engrossing fantasy read! The empire in question lies beneath a "shroud" In two ways: first, the oppressive regime of the mierothi, a powerful race of mages. And second, a physical barrier that helps them keep and consolidate their power. But there's a resistance gaining momentum, and chinks appear in the emperor's iron grip on the land.
Pros: Immersive world building and lovely prose
Cons: Not for the faint of heart. The body count starts on page one.
If you enjoy grim dark fantasy in the vein of Malazan Book of the Fallen and The Grisha Trilogy, this book is for you.
Tweet

The Martian is a near future, hard science fiction tale of a man accidentally left behind after our first [failed] mission to Mars.

The voice is what grabbed hold of me and refused to let me point this book down. Right from page one, I knew I was in for a good tale. True, most of the characters were a little flat (or just not very likable), but the tight POV narration made up for it. The science, too, was daunting enough for me to recognize that the author had done his homework.

Overall, a very entertaining read, one that rekindled my interest in astronomy and space travel, just in time for the New Horizon's pass by Pluto. Definitely worth picking up.
Tweet

The Name of the Wind

A few years ago after a friend pointed me to Patrick Rothfuss and Scott Lynch as modern fantasy writers. I remember the sample chapter of The Lies of Locke Lamora (Lynch's first book) quite clearly: it was so unique, so gripping... I've never hit the Buy Now button so quickly. In contrast, my memory of the sample from The Name of the Wind was more vague. I remembered noticing that (1) it started in a tavern, (2) with a rather meek barkeeper as the protagonist, and (3) felt rather cliche overall. I didn't finish the first chapter.

I went on to read other things instead, while Mr. Rothfuss rapidly ascended to become one of the best-known and best-selling fantasy authors in the world. I finally realized that I'd probably missed something. So I got the full book and gave it a shot. I'm SO glad that I did.

The Name of the Wind has a unique narrative structure: the opening and certain chapters are told from 3rd person POV as Kvothe recounts his story to a professional chronicler. Aside from brief, groan-inducing visits back to the tavern, most of the story is told in Kvothe's engaging first person point of view. That's where this book caught up to Lynch's great beginning: the story of an orphan trying to survive in a very rough world, and aspiring to make himself the best at something. When I reached that point, I was hooked.

Mr. Rothfuss possesses a lovely writing style and exceptional worldbuilding skills. Undoubtedly, that's a large part of why he's done so well. Admittedly, I found myself a bit dissatisfied with the narrative of The Name of the Wind, because it wanders somewhat off-course in the latter third of the book. My biggest problem was with the ending, because it resolves very little. I love a good series as much as anyone, but I think I would have preferred a story that could stand on its own.

That said, I'm certainly eager to read the next book, which tells me that the author just might know what he's doing after all.
Tweet 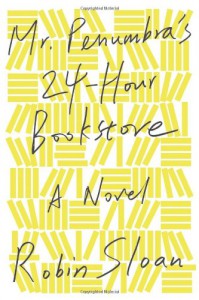 A quick and entertaining read that reminded me a little bit of READY PLAYER ONE. Thanks to my dad for recommending this one!

I wanted to read a space opera and thought, why not the Hugo and Nebula award-winning ANCILLARY JUSTICE. I read it rather slowly, with a break of 2-3 weeks somewhere in the middle. In retrospect, because of the book's accolades I certainly went in with high expectations. While I enjoyed the first person POV narration, I wasn't as close to the MC (Breq) as I would have liked, for most of the book. After certain events happened and I saw how it affected her, I came to like her more. The last 25% of the book was the most compelling and satisfying for me, and I liked the ending very much.

Pros: Fascinating technology system, in which human "ancillaries" are linked together into a sort of hive mind that runs a ship. This is the main spec fic element and it's undoubtedly crucial to the plot. The vast interstellar empire reminded me a bit of Dune and the world-building was excellent.

Cons: Also, her tendency to confuse gender (and use female pronouns for male characters) left me very confused. So did the fact that, in the first half of the book, the MC is not one human but many of them connected into a single unit, so they could see/hear/experience many things at once.

These complexities are undoubtedly part of why the book drew such critical acclaim, but I felt it made them a bit harder to read. On the bright side, the book ended on a high note and I *think* I figured out how the ancillary thing works (if not entirely the gender ambiguity) so I'm looking forward to Ancillary Sword.

The Republic of Thieves

The third book in Scott Lynch's Gentleman Bastard sequence moves the conflict to yet another part of the world, explores the intricate politics of Karthain, and delivers the long-awaited return of Locke's love interest, Sabetha.

The narrative again follows two alternating timelines: the present, in which Locke and Jean strike a deal with a faction of the Bondsmagi to save Locke from a deadly poison. In return, the Gentleman Bastards agree to work on the faction's behalf in a political game (rigging elections). In essence, the two opposing factions of Karthain make a bunch of non-mages their pawns for sport, with bragging rights the only prize. Locke and Jean are well-suited to vote tampering, and they're given almost limitless resources as well. Yet they're opposed by the selected agent for the other faction: someone who has their training and knows all of their best moves. Sabetha.

In the flashback timeline, we follow the juvenile Gentleman Bastards as they spend a season with an acting troupe (yet another training exercise courtesy of Chains). We see the young Locke meeting Sabetha, who's older and more capable and equal to him in every possible way. We don't get to see Chains again, but we spend more time with the twins. It's bittersweet, because I love seeing them in their prime, and my heart breaks when I remember their fate.

Admittedly, some of the plotlines are less interesting to me -- like the machinations of the Bondsmagi, and the story of the play itself -- that I found more distracting than entertaining.

Overall, I wasn't as glued to this book at every moment as I remember being for LIES (book 1), but it was still a fantastic read. I'm really looking forward to the next one.
Tweet This was an impressive debut from Charlie Holmberg, introducing us to an alternate version of British history, in which magicians train in a cool, materials-driven magic system. The protagonist comes reluctantly to study as a paper magician under one of the few resident masters of that art. He's patient and kind and mysterious enough to engage her very quickly, but there's not a lot of master-apprentice time before the crap hits the fan.

Cons: I wanted more magic and wider intrigue; there were hints at complex political landscape about the role of magicians in society that weren't explored. Most of the book follows essentially a single quest to save someone's life.

I look forward to the next one, and was pleased to learn that 47North has agreed to publish the third installment as well.
Tweet 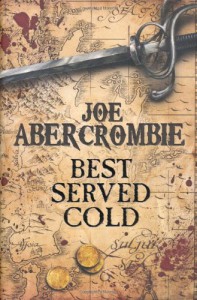 Though I was not an avowed Joe Abercrombie fan before starting this book, I wanted to read more of his work to see what the fuss was about. Turns out, the fuss is very much justified. The opening scene was enough to hook me, and the cast of well-rounded characters drew me in. The book read like a grim fantasy version of COUNT OF MONTE CRISTO; in essence, it's a story about a woman propelled by her need for revenge.

One thing I didn't remember from THE BLADE ITSELF was the sheer quality of the prose, which distracted, I think, from the rather dark world in which the story takes place. The world building is solid, and the plot is just complex enough without going to GRRM extremes. It works well as a standalone, too, which is difficult to accomplish in this genre.

Overall, this book pushed me firmly into the camp of Joe Abercrombie fans, and I look forward to reading HALF A KING.
Tweet

A good read that I looked forward to every night. The heroine was likable, the dystopian world fascinating. Looking forward to the movie and the subsequent books in this series!
Tweet 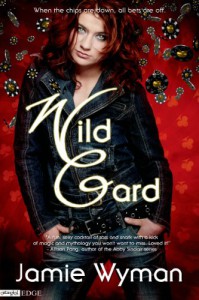 An urban fantasy that puts the gods of Olympus in Vegas. Great tension, and a spirited protagonist who's easy to cheer for. I read the last quarter in one sitting; it was that riveting! Looking forward to the next one.
Tweet